Probiotics For Your Brain

Optimize the gut-brain connection to benefit your mood, memory, and brain health.

With BrainBiotic and a healthy gut you can improve your cognitive function at any stage of your life.

BrainBiotic is designed to support the gut-brain axis

Probiotic for your Brain

Our stomach is often referred to as our second brain.

A healthy connection between your gut and your mind is proven to unlock benefits for your mood, memory, brain health, and cognitive function.

Research suggests that the probiotic strains in Brainbiotic™ are associated with increased brain-derived neurotrophic factor (BDNF), memory enhancement, and relief of stress-related symptoms.†

The microbiome is essential to health, immune function, and plays a major role in the communication between the gut and the brain. Over the past few years scientists have begun to understand the importance of the microbiome in the context of brain function. Studies show that the gut-brain axis (gut-brain connection) is deeply linked with numerous aspects of cognition including mood, memory, and brain health. By targeting the gut-brain axis with key probiotic strains we’re able to activate a positive immune response in the brain while improving cognitive function at any stage of life.

Probiotics are the healthy microbes our gut needs to function at its best. Within the gut is a vast and diverse “rainforest” of hundreds of different bacterial organisms. Over the past 5 years over 4,000 studies have investigated the link between the health of the gut microbiome and the health of the human brain. We’ve long known the gut’s role in immune function and digestion, but only in recent years have scientists discovered the powerful connection between gut and mind. Of all the studies looking at the gut-brain axis, researchers have identified 4 key strains that have been proven to unlock benefits related to mood, memory, brain health, and higher level cognitive functions.

With the probiotics found in Brainbiotic™ you can support your brain while supporting your gut at the sametime.

L. Plantarum is a beneficial and versatile probiotic strain, able to survive stomach acid with ease, allowing it to reach the colon fully active and intact. Here, the probiotic strain is effective at maintaining, restoring, and balancing the gut microbiota.

Studies have shown that L. Plantarum can support long-term memory by increasing levels of the all-star brain growth hormone, brain-derived neurotrophic factor (BDNF).  The culture has also been shown to improve cognitive abilities in rats by lowering pressure and exerting neuroprotective properties in brain cells. [1]

Regular consumption of L. Plantarum may also reduce anxiety. The strain was found to increase levels of dopamine and serotonin while reducing anxiety symptoms, depressive symptoms, and inflammatory cytokines associated with mental and physical stress. [2 3]

L. Plantarum supports the health and survival of brain cells by suppressing activation of the protein NF-κB, the single most important regulator of inflammation in the body and brain. NF-κB inhibition is linked with brain growth and development. More specifically, inhibition of this protein is associated with improved learning, intelligence, neural plasticity, and memory. synaptic plasticity, BDNF levels are also increased, which enhances cognitive function and the growth of new neurons. [5, 6, 7]

L. Brevis is one of the most well-studied probiotic strains known to influence human health and cognition. The predominant culture in sauerkraut and pickled vegetables, this strain is well known to increase immune function and fight bacterial infection, in addition to its unique effects on the central nervous system.

L. Brevis provides support against inflammatory compounds associated with impaired memory and cognitive decline. It is one of the essential probiotics for brain health because it increases levels of BDNF, the brain’s all-star growth hormone that controls the health and growth of new neurons. In one study, old rats were given L. Brevis and young rats were given a placebo. The results found that in addition to lowering inflammatory markers TNF, IL1β, and NF-κB L. Brevis significantly increased expression of BDNF to levels greater than the healthy young rats. [8]

L. Brevis has also been shown to have a positive effect on reducing anxiety, depressive symptoms, and restoring a positive mood. [9]

These are two of the most effective probiotic strains to promote a positive mood, reduce stress, and relieve anxiety and depressive symptoms.

In one study, consuming a mixture of three Lactobacillus and Bifidobacteria strains for eight weeks significantly reduced depressive symptoms. The probiotic also reduced inflammation in the patients. [10]

A handful of other studies have examined how probiotics affect depressive symptoms in healthy subjects. In healthy people these strains have been found to reduce:

I have been taking brianbotic over the last couple of months along with Magtech and CILTEP. I have noticed that slowly it is helping me with day to day activities and helps me to concentrate better by reducing brain fog and enhancing support for stress relief. I highly recommend the product!

I have tried every probiotic out there but never thought it would affect my mood in the way it did!!

I’d read about the gut Brain connection but didn’t know what to do about it until Brian Biotic came. It does help drive more focus and has a sustained impact. I’ve tried it once and have liked it

Lacto P. offers robust probiotic support against inflammatory compounds associated with impaired memory and cognitive decline. The strain has also been shown to increase BDNF to support the health and growth of new brain cells.

Daily use of this strain has been shown to support gut bacteria associated with positive mood states. The cultures accomplish this by relieving stress-related gut inflammation and increasing production of calming neurotransmitters in the gut to support a positive mood and relieve stress.

Daily use of this strain has been shown to support gut bacteria associated with positive mood states. The cultures accomplish this by relieving stress-related gut inflammation and increasing production of calming neurotransmitters in the gut to support a positive mood and relieve stress.

Take 1-2 capsules per day, or as directed by a healthcare practitioner. 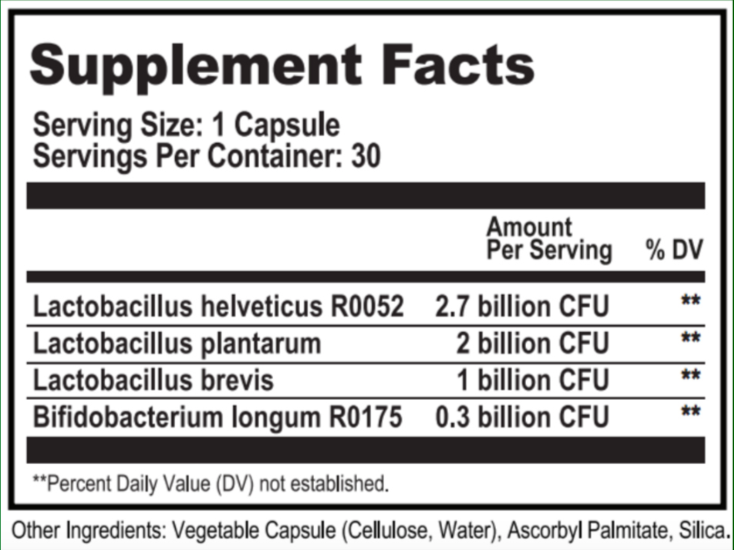 Pro. As in, the same professional quality you've come to expect from NS. I've been a taking a couple good-quality probiotics (Probiotic 3 and Primal Defense Ultra) for a few years now and completely believe in their essential role in our guts. I've been taking Brain Biotic for 4 days now. I don't know how NS figured out how to combine these specific strains. But what I do know is that you will feel exactly as described. Very focused. Slight feelings of mood improvement. First day I took in the evening, but I wouldn't recommend this as it kept me awake. Last couple of days I've taken in the morning and early afternoon and was fine.

Loading...
Was this helpful?
L
Lisa Reviewed by Lisa
Verified Buyer
I recommend this product
Rated 5 out of 5

Makes a huge difference when working on a computer all day!

I originally bought this supplement, because my eyes were becoming incredibly sensitive from staring at the computer screen at work all day. This supplement made a huge difference and eliminated the sensitivity that I was experiencing from eye strain and blue light exposure. Whenever I run out of this supplement, I notice the difference soon after. This is a must have for anyone noticing eye sensitivity or who wants to protect their mitochondria from blue light exposure!

Loading...
Was this helpful?
RT
Rob T. Reviewed by Rob T.
Verified Buyer
I recommend this product
Rated 5 out of 5

Great for your stomach!

I never knew how much your stomach is connected to your brain! I love brain biopics and it has helped me tremendously improve my critical thinking!

Loading...
Open Video by Rob T. in a modal
Was this helpful?
SA
Shah A. Reviewed by Shah A.
Verified Buyer
I recommend this product
Rated 5 out of 5

Previously, I was so so nervous when presenting which affects my voice projection (low and shaky) also unable to think so i only read my notes (although I had memorized it earlier).

Been taking BrainBiotic 1 week prior to presentation... so this time I was less nervous and calmer. I can memorize what i want to talk about, i did not refer to my notes at all during presentation and i can event crack jokes. BrainBiotic really helps. Thank you.

Loading...
Was this helpful?
J
Jill Reviewed by Jill
Verified Buyer
I recommend this product
Rated 5 out of 5

I purchased this product from Sprouts (and then ordered more from Natural Stacks because it was cheaper), about two weeks ago. I have suffered with depression/anxiety for years, without finding a resolution. I have tried prescription meds, herbs, everything. After learning more about "certain strains" in probiotics, I decided to try this. I noticed relief the very first day. I take two a day, and am very happy with the improvement in my mental health. Because the results are so noticeable, I feel confident that internally there must have been an undiagnosed problem, and I am getting better. I do try to eat healthy, and workout. I also had a problem with my order (something was left out). The customer service I received to rectify the problem was top notch. I will use this company again in the future.